Grenada is a Caribbean island with a rich history of resilience and revolt against the numerous colonial powers that settled there. The island was first sighted by Christopher Columbus in 1498, then settled as a French colony in 1649, eventually being captured by the British during the Seven Year’s War in 1762. Up until 1838, Grenada’s economy was fueled by sugar cane and indigo dye produced by enslaved Africans. In 1887, it was made a Crown colony under British rule, however, due to the unlivable labor conditions, there was much upheaval and protests. These events later resulted in the election and rule of Prime Minister Eric Gairy, a native Grenadian who granted the country independence in 1974. Despite its newfound freedom, the Gairy administration decided to remain with the British Commonwealth, consequently placing the country under the Monarchy of Queen Elizabeth. With many past adversities, the nation was left anxious, and Gairy’s approach to leadership was not exactly peaceful. He directed what was called the “Mongoose Gang” which was a private military within Grenada that terrorized civilians. Amid the high tensions between the unpopular government and the people of Grenada, the New Jewel Movement (NJM) was founded in 1973 with the hopes of informing and reconstructing the corrupt government in Grenada. They tried to implement the Independence Constitution of Grenada that would give new freedoms to the Grenadian people, however, it was ignored time and time again by the Gairy administration. They even tried to democratically win the vote and take over the office, but the results of the numerous elections were corruptly tampered with, stopping them from taking control. 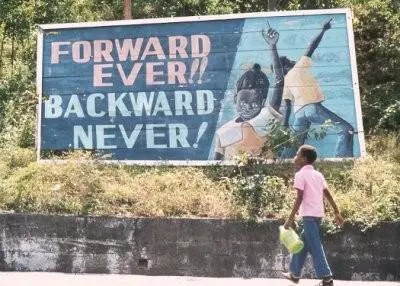 Photograph of Billboard in Grenada with writing “Forward Ever!! Backward Never!”

Despite the fact that Grenada had technically gained its independence, it was still desperately suffering from the repercussions of slavery and colonization. Seeing that it was a destabilized country with unemployment rates upwards of 50 percent and a population that had been abused and exploited by numerous colonial powers, there was a desperate need for a civil uprising. Seeing that the NJM was highly opposed to the instated political party due to its ties with foreign countries, use of weapons, and lack of devotion to its population, they were determined to be the new leaders of the revolution. So in 1979, the New Jewel Movement overthrew the existing government and seized control of their island, bringing a Marxist movement into their newly official regime named the People’s Revolutionary Government (PRG). After the founding of this government, there was a newfound sense of joy among the people of Grenada. The photograph above shows the NJM slogan “Forward Ever!! Backward Never!” This beautifully conveys the idea that the Grenadian people were abandoning their past struggles and working towards a revolutionized way of life. After being tossed around for so long, they were finally able to take control of their futures and their children’s futures. With this new sense of liberation came the political involvement of many previously uninvolved people. 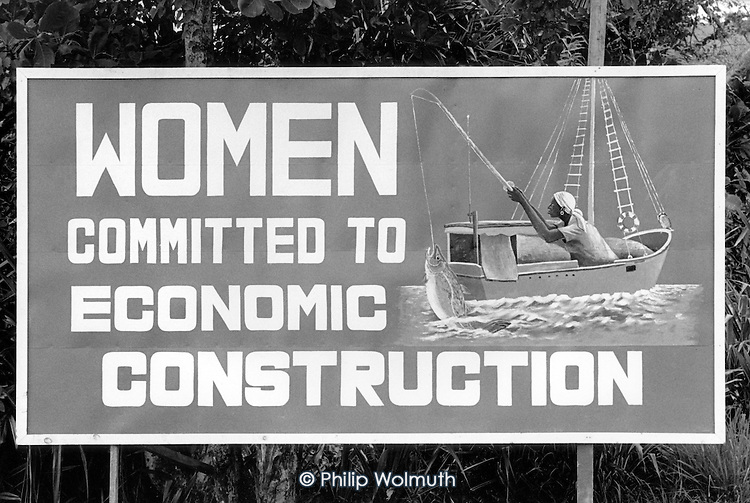 It was particularly women who rose up against their oppression. Inside the NJM, a subgroup was formed for women’s rights called the NWO (National Women’s Organization of Grenada). The nationalism of this movement can be demonstrated through women’s immense efforts to join together and help their community in the midst of extreme hardships. This can be shown through the women of the NJM’s cooperation. Although Gairy was out of power, there were still people who stayed loyal to him and his regime. The women of the NJM particularly wanted to expand their organization to allow for more awareness and participation, however, in order to get this done, they needed all on board, even women outside of the NJM. The women loyal to Gairy (Gairyites) opposed this idea, resulting in conflict between the two female groups. In spite of their shortcomings, the women of Grenada joined together to form a national women’s group. The fact that they agreed to work together to further Grenada’s advancements shows Grenada’s growing national spirit. Not only does their agreement show commitment, but it also reflects upon the diversity among the women in the NJM. The fundamental ideas of the NWO were very inclusive, reflecting the NJM’s value of equality. It is said that the aim of the NWO was “to have programs to cover the needs of women of all types – NJM, Gairyite, GNP, old, young, and all classes” (Phillip-Dowe 51). For so long, the women of Grenada had been ignored due to colonialism, so after this revolution, they felt the need to bring happiness and liberation to all. 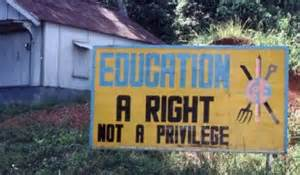 Women also played a large part in the education of the island’s youth. The NWO developed much of the school system and hosted volunteer teachers who taught “the island’s cultural heritage and oral history” (Phillip-Dowe 55). The dedication and time that Grenadian women put into educating and including all people further adds to the idea that this revolution worked in order to overcome their prior struggles.

It was not only groups of people who further grew Grenada’s national spirit, but also art forms. Grenada’s revolution was one filled with culture, music, art, and expression. In an article written by Gail R. Pool from 1982-to 1984, Pool uses many songs to support one of his leading points, saying that a revolution requires culture and mutual understanding in order to work. The New Jewel Movement, led by Maurice Bishop, is a prime example of this idea, where we can observe the use of song, art, and poetry in attempts to get their message across. An advertisement broadcasted on Radio Free Grenada is used on page 13 discussing fried chicken, “Just arrived! Something you’ve long-awaited. A fried chicken it’s not Kentucky, it’s not Chuck Wagon fried chicken, It’s Quality fried chicken.” From this quote alone, we receive a sense of nationalism, saying that Grenadian belongings are generally better than those of any other country. Later on, it includes another song that was sung 4 years after they gained freedom, “For all, there are many values, and last but by no means least, the street dancing marks March 13th, liberation date. Grenadians, as is tradition, beautify your communities. Put up your buntings and banners, brighten those walls, write up those slogans.” We read the call to everyday people, post-revolution, encouraging celebration and expression from Grenadians. A shared will to live and grow together as one nation is shared in Grenada’s national anthem, “May we with faith and courage Aspire, Build, Advance. As one people, one family. God bless our nation.” These customs were soon embedded into Grenadian culture, with deep impacts all around Grenada.

While the New Jewel Movement demonstrated everyday people’s continuous fight toward freedom, there were major downfalls that soon led to the end of this battle. Charles W. Mills theorized that because of many separations within the NJM it fell apart. Using the experience of 8 NJM members that were currently living in Canada, Mills emphasizes the damage caused by the ranked membership in the movement. Mills talks to a long-time applicant member, ‘B’, who could no longer advance in the rank system of the NJM, “I knew men who had been struggling against Gairy since 1970. We gave him money. … Then in ‘79 when you figure you finally achieve your goal, you find you have to do six weeks of Lenin before even becoming an applicant! …” (28). The ex-NJM long-time applicant member goes on to say that it was unfair that for some it was easy to become a member and it was the opposite for others. ‘B’ makes it seem that the oppression he and fellow Grenadians received from Gairy was not that different from the member rank process of the Grenadian New Jewel Movement. Adding on to the causes that led to the downfall of the NJM, the separation between folk and elite was very present in this movement, causing the revolution to weaken. The New Jewel Movement eventually ended up being, “exclusively built around the young and educated who created OREL [Bernard Coard’s Marxist study group, the Organization for Education and Liberation]…” (28). While the NJM claimed to be inclusive to many it seemed that it was purely for the educated applicants, which would mean that the ⅓ of Grenada’s population which was functionally illiterate would be excluded from their nation’s revolution. Being that the New Jewel Movement was, according to Mills, inaccessible to most Grenadians the collapse of the NJM was not surprising.